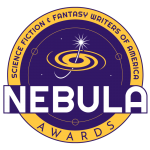 The Science Fiction and Fantasy Writers of America (SFWA) announced winners of the 2020 Nebula Awards at the 56th Annual Nebula Banquet during the 2021 SFWA Nebula Conference.

END_OF_DOCUMENT_TOKEN_TO_BE_REPLACED The Grand Prize winner will be featured on the Baen website. The author will be given a trophy and paid professional rates.

The winners will be honored during the virtual International Space Development Conference, to be held May 27, 2021. Judges were Les Johnson and the editors of Baen Books.

The winners for the 2020 British Science Fiction Association (BSFA) Awards have been announced.

The awards were voted on by members of BSFA and the British Annual Science Fiction Convention (Eastercon). The winners were announced during ConFusion, held online April 2-5, 2021, and the ceremony was livestreamed on YouTube. For more information, see the BSFA website. Winners of the Tolkien Society Awards 2021 were announced on April 11, 2021. The awards “recognize excellence in the fields of Tolkien scholarship and fandom, highlight­ing our long-standing charitable objective to ‘seek to educate the public in, and promote research into, the life and works of’” J.R.R. Tolkien. The society’s trustees choose the shortlist, with winners chosen by the membership. The Game of Thrones creator is exec producing a TV adaptation of Roadmarks from sci-fi novelist Roger Zelazny, which is development at the WarnerMedia cable network.

The book was written in the late 1970s and published by Del Rey in 1979. It is about a highway that can travel through time, linking all timelines and places together for the very special people who discover it. Some might use it to explore the vast mysteries of the world, but for others…the road might be their only hope to survive, rewrite life-altering mistakes, and create a better future for themselves and the ones they love.

The Road was created by the Dragons of Bel’kwinith and no one knows who they are or why they made it.

Martin is friends with Zelazny, having met him at a writer’s workshop in Bloomington, Indiana in the mid ‘70s before becoming closer when he moved to Santa Fe. In a memoriam for Zelazny, who passed away in 1995, Martin said he was a kind and generous man who lent him money when he was broke.

Vazquez’s previous TV credits include Marvel’s Runaways, Once Upon A Time, Nikita, Human Target and Prison Break and she recently adapted Barrier, based on a Brian K. Vaughan graphic novel, for Legendary Television.

George R.R. Martin said, “My career in television started in 1985 when I adapted Roger Zelazny’s Last Defender of Camelot for The Twilight Zone. Roger was a friend, a mentor, and one of the greatest science fiction writers who ever lived. It was an honor to be able to bring his work to television. That is why I am so thrilled to be a part of adapting Roger’s novel Roadmarks for HBO. We have a great book, a great screenwriter in Kalinda Vasquez, and the makings of a wonderful, original show.  I look forward to a long and thrilling journey.”